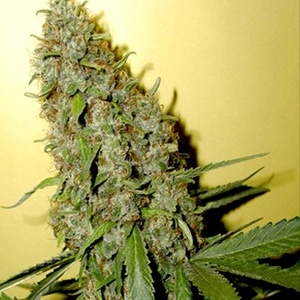 Cheese is a famous strain originated in the United Kingdom when a group of squaters in the Birmingham grew a pack of Skunk #1 seeds, soon they realised that one plant was very different to the rest. This was the original Cheese. It was kept by the squatters, and cuttings were made free and available to anybody who wanted them.

The strain is a rare female phenotype of Skunk #1 a cross between Afghanistan (Indica), Mexico (Sativa) and Columbia (Sativa). It first appeared between 1988 and 1989 and was quickly cloned and passed on. This plant produced impressively large buds and have a very distinctive cheesy odour.

As only 1 female ever existed, only cuttings could be obtained. As a result, all available Cheese strains from seed are not 100% Cheese, and breeders are doing what they can to bring these crosses back closer to the original Cheese.